William was my third great grandfather, and the oldest ancestor to whom I can fully attest. William heads a hulking great family gravestone is the churchyard of St. John and Trea, Moneymore, Co. Londonderry. It's somewhat unfortunate they seem to have the date of his death wrong (it was 1868, not 1866); we know independently from a civil death certificate and from his obituary in the Dublin Freeman's Journal it was July 12 1868 (ironic). His wife, Mary (1783-1865) is also buried there. 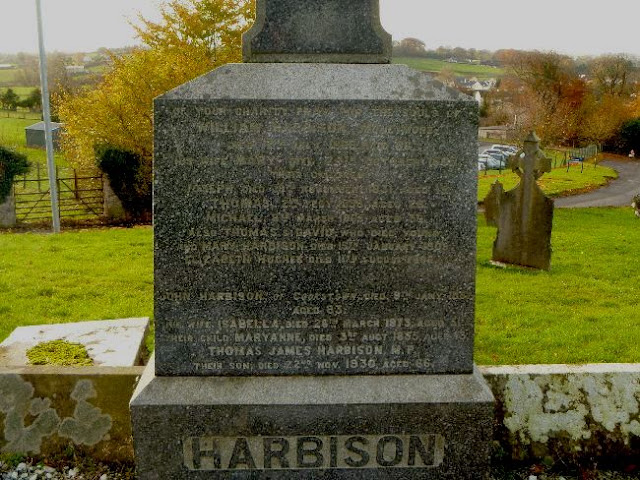 The gravestone lists some but not all of his children. These are Michael and Thomas were born not much more than a year apart. There is, uniquely, a record of Thomas's christening in Ballinderry on Sep 30 1828. I've looked hard for a similar record for Michael (Ballinderry began recording christenings in 1826) but can't find it. Thomas's christening register does, however, give William's wife's full name as Mary Donnolly. This is the only other record we have of her. A William Harbison also is recorded as a godparent in an 1827 christening in Moneymore. Those are the earliest contemporaneous records of William. There are the data from the Irish census of 1831 for Moneymore. The house number is arbitrary.

The three females are all accounted for; Mary Donnolly Harbison, and daughters Elizabeth and Mary, both of whom would have been underage. Of the eleven males, one is obviously William; we know of seven sons, the oldest, John, was 22, not yet married and likely still at home. That leaves three males unaccounted for. They could have included William's father, who was likely 70 - 85 and might still have been alive; uncles or brothers; or sons. I suspect at least one and possibly all three of the males enumerated were sons. After all, several of the children we know of were only identified by a single piece of data; we might have completely missed others. All we really know is that the other missing son or sons weren't named John, James, Joseph, Francis, Henry, Michael, or Thomas.

Most notably there is no William Jr.. It is mentioned on several occasions William was a modest man; nonetheless, it was the rule at the time that one son be a 'junior', and frankly, they had a relatively small number of names they used; they may have been running out. The other sons might have left home (there is room for 1 or maybe even 2 before John), and/or emigrated; or they might have died before death records were systematized about 1860.

Thomas was almost certainly the last child. Mary Donnolly would have been 47 by the time she was ready to conceive again, and she'd already given birth 14 times. William was certainly religious, and the child would therefore have been baptized. By 1830 most of the local churches at which he might have been baptized were keeping registers, though bad clerical handwriting, stains and fraying of the edges always mean a few baptisms are lost.

The other son or sons may be hard to find, though I have a couple of leads.

Posted by Gerard Harbison at 3:26 PM