-- Like dolmens round my childhood, the old people, from Poisoned Lands, and other poems, John Montague, 1961. John Montague (1929-2016) was the Irish Poet Laureate. Born in Brooklyn, NY, he grew up in East Tyrone; the poem is about his childhood. The same story of Wild Billy was passed down through my family. Bowler and sash refers to the traditional garb of the protestant Orange Order, during summer marching season, when they march, banging loud Lambeg drums, usually through Catholic areas, to show them who is boss. (Tiocfaidh ár lá, bitches) And King Billy was of course William of Orange, who defeated James II 1688-1691, resulting in the imposition of the Penal Laws on the Catholic population.

On my first day in secondary school -- high school, to youse Yanks -- Mr McGillen, the drunken Latin teacher featured in Roddy Doyle's Smile, started calling the roll, and when he got to my name, called me up to the front of the class

Harbison?
Yes, sir
That's a Protestant name.
So they say, sir.
Are you Protestant, Harbison?
No sir.
Good. Sit down.

As we've seen, he wasn't wrong. The Harbisons who came to Antrim 1650-1670 were Protestant, specifically Presbyterian, likely some of them Covenanters. The very existence of Catholic Harbisons is an anomaly. And yet there are at least three clusters of us. One, as we've seen already, is on the western shores of Lough Neagh, from Magherafelt in the north to Dungannon in the south, but mostly within a few miles of the lake. It dates to at least 1745, the approximate birth-year of James Harbison of Donaghenry; and in the north, the birth of John Harbison of Ballyneill, born about the same time or even earlier. 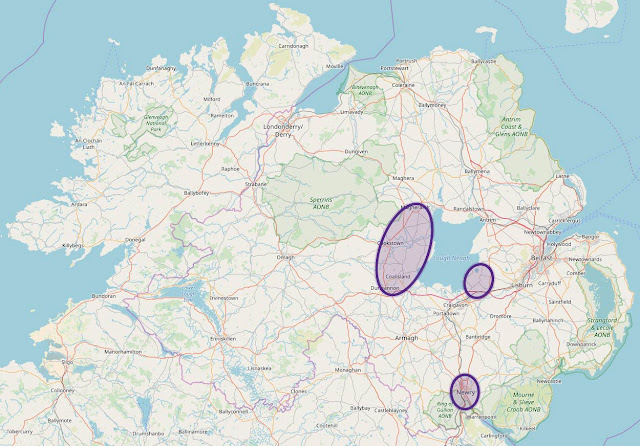 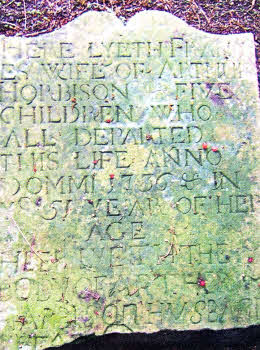 The second is on the other shore of the lake, around Portmore. I'll get into this group a little later, but to tide you over there's an excellent write up by the Digger of Lisburn; the Catholic cemetary at Laa-Lou houses the grave of Arthur Horbison, his wife and children, d 1736 age 51.

And there's a third cluster in Newry, in County Down near the Louth border, about which I know very little.

If one assumes each group descended from a single family, then we have two or maybe three families of Catholic Harbisons in very early 18th century Ulster. If they're related to each other, we have to go back even earlier.

Since the major migration from Scotland to Ulster was 1650-1700, it is possible that a Catholic family of Herbertsons/Harbisons migrated from Scotalnd with the large-scale Presbyterian migration. This seems somewhat unlikely. The Catholic Church was heavily suppressed in lowland Scotland pretty much since the reformation in 1550. And most of the Harbisons/Herbertsons seem to have been Presbyterians, and sometimes Covenanters.

But conversion seems equally implausible. The penal laws against Catholics in Ireland were at their most severe in the early 18th century. Converting to Catholicism meant losing one's land, and existing Catholics had to distribute it evenly among their sons with each generation, rapidly making farms unviably small. While it is not clear these laws were universally applied, if they had been applied stringently anywhere, it would have been in Ulster.

Presbyterians were also subject to persecution, but it was not quite so severe. Moreover, while one could reasonably envisage conversion from Prebyterianism to Church of Ireland or Church of Ireland to Catholicism, a conversion of Presbyterian to Catholic involved a huge change in beliefs; from a non-hierachical religion to an intensely hierarchical one; acceptance of transsubstantiation, sacraments, etc..

Therefore, the Wild Billy story makes a certain amount of sense, and I'll deal later with a slightly modified version of it that also explains the DNA results. But the Digger gives an alternative story, equally romantic.

Family historians who have researched the surname in this area, relate a story about a member of the family who was sentenced to death by hanging in the area. It is alleged he was given a 15 minute reprieve to run for his life. He took that opportunity, went into hiding, and then made his escape across Lough Neagh to the County Tyrone shore, making a new life for himself and establishing the family surname in a new territory.

It explains where the Tyrone/Londonderry Harbisons came from, but not the Portmore Harbisons. And I don't believe it, anyway.
Posted by Gerard Harbison at 11:30 AM