I conjectured William Harbison Jr. existed as the third son of William Harbison b. 1780. Until recently, the sole tangible evidence was a third-hand report of a letter he wrote from Vincennes, Knox Co., Indiana in 1841. I've now located him.

There were dozens of Harbisons in SW Indiana in 1840. But they were almost all migrants from Kentucky and South Carolina. And I can find no record of William there, other than the letter. What seems to have happened was he went north to Illinois, and on September 1, 1845, bought 40 acres in McHenry County, very near the Illinois-Wisconsin state line.It's the far top left quarter of the deeper orange box on the map. It's close to the modern intersection of Thayer Road and Illinois Hightway 27. It looks like typical midwestern farmland; but 40 acres (a quarter of a quarter section) is not much. Most of his neighbors, according to the 1850 census, were Irish.

William married Bridget Foley from Dublin, Ireland, who was considerably younger than him, and by the 1850 census had three children. Then he disappeared from the census in 1860, and appears on the census with his two sons as Wm Harrison in 1870. He is listed in the 1880 census as a pound master, a common 19th century occupation that involved caring for all the county’s stray livestock until its owners picked it up. He does not appear in any of the historical accounts of Woodstock or McHenry County, and so may have been considered a person of little consequence. He and his wife were definitely Catholic; they were buried in Calvary Cemetery, in McHenry County, in 1890 and 1892 respectively. His gravestone would suggest he was born on March 14, 1812; years of birth inferred from the two censuses are 1811 and 1815. Bridget, from hers, was apparently born in February 1825.

Henry was according to the 1850 census, born in 1844 in Illinois, but his death record says Jan 10,1847. He worked as a coachman in Milwaukee, and was married in a Methodist Episcopal Church on Biddle St in Milwaukee on December 2, 1885 to Louise Hoffman, daughter of Peter Hoffmann and Katherine Schmidt, from Bavaria. On his death certificate he was listed as a toolmaker or machinist in a watch factory, and died on Mar 31, 1927 in Elgin, Kane Co., Illinois, where he had lived 32 years. His father is listed as being from Belfast, Northern Ireland; his mother from Dublin. He and Louise had no children.

William J Harbison's death certificate lists him as being born on April 12, 1844, but given the 1850 census record and the date, it's likely to have been 1849, and Mary Elizabeth was his twin sister. He mustered into Company K of the 153rd Illinois Infantry on Feb 11 1865, apparently guarding the Nashville and Chattanooga Railroad and out on Sep 21 1865. He is listed as divorced and living with his parents in 1880. Divorce would be unusual for a second-generation Catholic immigrant. There is no record of any children. I can't find him in 1900 or 1910; in 1920 he was living in the Illinois Soldiers and Sailors home in Riverside, Adams Co. Illinois.

I've previously listed William and his siblings. In the light of the rules for given names I discussed in the last post, I'm going to revise that slightly.

William seems to be the unquestioned oldest son, and would therefore have been named after his grandfather. The second and third sons on my original chart had fishy birthdates. John's birth year of 1785 is based solely on his death cerificate, and he died a very old man. Sampson's is based on entries on the 1850 and 1860 census, which give wildly discordant birthdates (1790 from the 1850 census; 1782 from the 1860 census). Previously I just averaged them. Looking again at the 1850 census, which got his name incorrect in any case, it's plausible his age was entered as 66, rather than 60. That would give birth years of 1782 and 1784, averaging to 1783, making him older than John.

If Sampson were the second son, he would have been named after his maternal grandfather. This makes a certain amount of sense, since his name is unique among the Harbisons to himself and his descendants. That would then made John the third son, named after his father. It is notable that the first sons of most if not all of William's siblings were also named John. So this tends to bolster the hitherto rather weakly-proven conjecture that William's father was the Catholic John Harbison resident in Ballyneill during the 1766 religious census.

The fourth son would then appear to be Henry. He would have been named after his grandfather William's eldest brother. And, sure enough, the two Harbisons mentioned in the Protestant Householders census of 1740 for the parish of Ardtrea in the barony of Loughinsholin are William and Henry! There is an entry in the will index at PRONI for Henry Harbison, d. 1765, so he never made it to the religious census. It is also possible that William and Henry were Catholics, since Bill Macafee noticed that apparently the census for Loughinsholin seemed to include some Catholics. Or William Harbison in the 1740 Householders List may have been the legendary Wild Billy Harbison.


-- Like dolmens round my childhood, the old people, from Poisoned Lands, and other poems, John Montague, 1961. In all honesty, I'd have to admit I have no clue about the birth order of the final three sons, though I suspect Edward was the youngest. Likewise about the three daughters, although, I suspect, Eleanor was the third.
Posted by Gerard Harbison at 7:14 AM No comments:

I was brought up in Ireland. I thought I was pretty much familiar with Irish popular culture, particularly the aspects of it absorbed into my own family. But I didn't know this.

Angus Baxter in "In Search of Your British and Irish Roots" describes a pattern that was popular in England in the 1700-1875 period:

In fact, several other sources have suggested that it was also obeyed in Ireland. It certainly seems to have been obeyed in my family. Consider the order of first born sons from 1740 through 1885.

The rule predicts alternation in given names along this line. You see this, for example, also in the kings of Denmark, all the way from 1534 up to the present day.

John b. 1809 had 7 daughters before he had a son, and so William John might have been an effort to cram 2 names into 1, because he was running out of time. In fact, most of my ancestors did not have middle names until the mid-19th century.

Anyway, as is obvious, we can predict the grandfather of William (b. 1780) was also William, and I have a candidate. More of this anon.

Chris Harbison back in 1999 referred to two letters, one of which I'd heard of previously, originally discovered by Edith Harbison Hinkle.

Mrs Edith Hinkle copied two letters when she visited Ireland back in the 1920/30s: May(??) 26, 1860, from Henry Harbison near Williamsburg, Huntingdon Co.,PA to John Harbison, Moneymore, Co. Derry, Ireland, and Jan 23, 1841: From son Wm Harbison at Vincennes, Knox Co., Indiana; to Wm & Mary Harbison (parents). He had lived in Washington for a time, speaks of brothers John, Francis & Michael.

By my reckoning, the first was Henry writing to his brother John in Ballyneil, near Moneymore. It could have been his nephew John, of course, but the nephew had been in Cookstown since the 1830s.

The second is clearer and more informative. William and Mary Harbison were obviously William b. 1780 and his wife.

John, Francis and Michael were all sons of William. Previously I wondered why there was no William Jr.. Now we know -- he went to America, as his uncles Henry and Sampson did! The most probable American records are an arrival in Philadelphia from Liverpool in 1840; and a death in Philadelphia in 1845. But I'll do more research on this. He was likely in Washington or Knox County Indiana only briefly. William is given as 30 in 1840, which would make him the next sibling (younger, or perhaps older) to my second great grandfather John.

I would dearly like to get hold of these letters. They really should be preserved.

Posted by Gerard Harbison at 3:07 PM No comments: 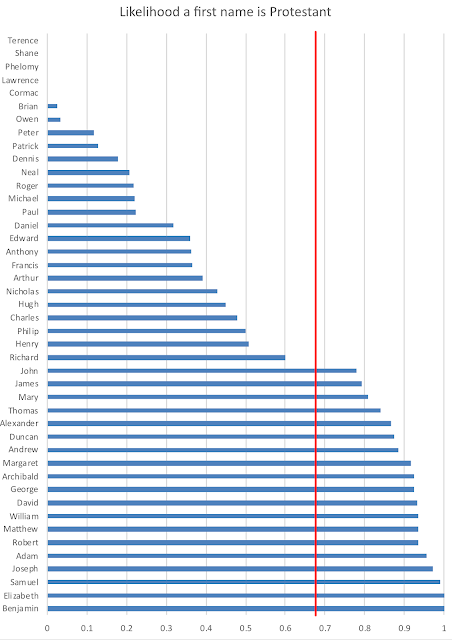 Posted by Gerard Harbison at 4:42 AM No comments: