Sometime in the late 1960s or early 1970s a gentleman from America called my father at our listed Dublin telephone number, and said he was researching his 'roots'. If I recall correctly, he was a descendant, maybe a grandson, of a John S Harbison, apparently famed among beekeepers for introducing the honeybee to California. My Dad thought this was all hilarious (unjustifiably; just think of the economic impact of honeybees to a farming state).

In any case, my father told him his fanciful theory, originally my uncle Austin's, that the Harbison name was a corruption of 'FitzHerbert'. Maria Anne Fitzherbert was mistress of George IV, and we were descended from her bastard child (and were therefore 78th in line to the throne, or something). Total rubbish of course. But my Dad did put the American in touch with my cousin Rosemary, who had done quite a bit of genealogy, back to the 18th century, and had a theory we came from Renfrewshire, and this is probably correct.

But Rosemary's genealogy wasn't of much use to our putative American cousin, because our branch of the family are Catholic, and are only distantly related to his Protestant ancestors. In fact, while we had a theory of how we became Catholic, we really had very little idea of our family line before about 1800. That's part of being Catholic and Irish.

But the American did leave a piece of paper. 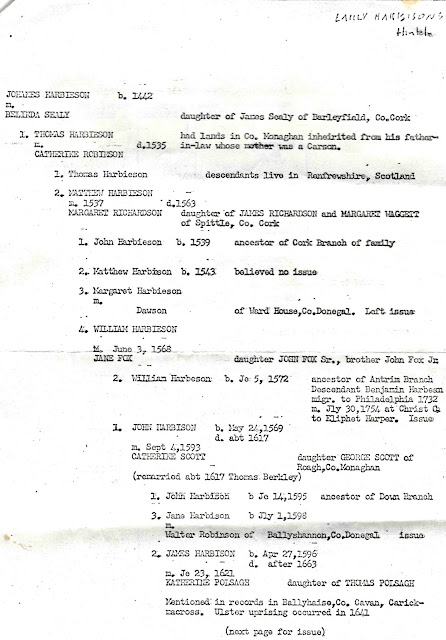 The creator (top right corner) is someone called Hinkle. I'm 99% sure this was Mrs. Edith Harbison Hinkle, 1877-1947, daughter of John S Harbison. She seems to have gotten interested in genealogy while preparing her application to be a member of the Daughters of the American Revolution.

In fact, you can find the Hinkle genealogy all over the net. I found 22 separate versions of it on ancestry.com. Here is a representative one, condensed a little for brevity. It doesn't seem to have been published (at least, I can't find it on WorldCat) but seems to have been disseminated first by photocopy machine and then electronically.

As you can see, the Harbisons are supposed to have migrated to Ireland from Harby, a small village in East Nottinghamshire in England, in the early 15th century, via Cork.

The places are mostly real. Harby exists, though I don't know if it existed in 1415; Barley Field is a small townland near Kinsale, Co. Cork. Shanroe is a townland on the Monaghan/Fermanagh border; Trough is a barony that makes up most of far-northern Monaghan. And Roagh isn't easy to locate, but may be a corruption of Trough.

But the genealogy is rubbish. Here's why: 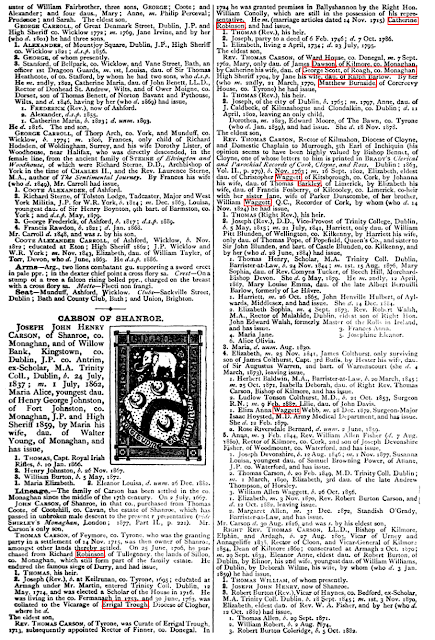 So why did Edith Harbison Hinkle concoct this fake? Possibly she was entranced by the idea of the Harbisons being from Harby, in dear old Nottinghamshire, with perhaps one of her ancestors a Merrie Man. Perhaps she was just a fantasist. This is not merely careless genealogy, of which there is far too much. It's obvious fraud.

And this is why you shouldn't trust anyone else's family tree unless it's meticulously sourced and you can check the sources.

Posted by Gerard Harbison at 2:47 PM