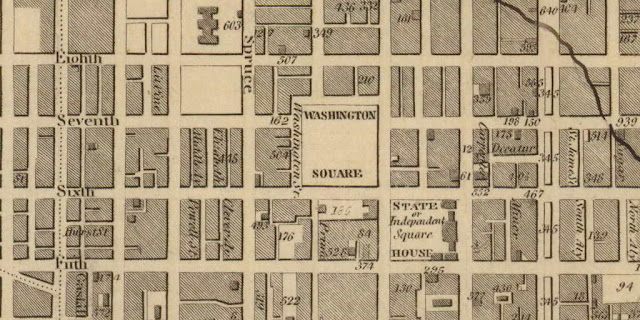 Here is a section of Simons' Map of Philadelphia, 1831, Delaware River to the bottom, and therefore north to the right, showing South Alley, at the far bottom right, where Rosanna Harbeson is reported to have lived. It's a block and a half north (right) of Independence Hall (the building on the right side of Independence Square). The alley has long since been demolished to make way for the Independence Hall Visitor Center. But judging from the contemporary directories, it was a busy commercial center, an odd place to live, except there was a boarding house at 2 South Alley. One deduces, therefore, that Rosanna was a transient, possibly newly arrived from Ireland, when she died. There is no evidence of other members of her family in the neighborhood. The Holy Trinity church and cemetery, where she was buried, is on the top right corner of Sixth and Spruce. It was of course normal for Catholics to live a few blocks from a church. So, still a mystery. She was almost certainly from Ireland, but did she arrive alone? And what killed her at age 30?

Edit: oh dear. The widow Brown's boarding house at South Alley was apparently a bordello. Philadelphia in 1825 was a notoriously libertine city, with an active seaport and a red light area called 'Hell Town', although Mrs Brown's establishment was not in Hell Town and was apparetly a cut above the usual knocking-shop.

Posted by Gerard Harbison at 12:56 PM No comments:

I've been slowly working through the plethora of Philadelphia street directories, trying to make coherent sense of the family of Sampson Harbison. And I was making headway. There are two John Harbisons in what was Kensington Ward 3 in 1850 and became Philadelphia Ward 17 in 1860, near St. Michael's Church, which was a nucleus for Catholic Harbisons. Both were listed as weavers. This means little; virtually every poor person who came from Northern Ireland was a weaver. Ulstermen subsistence-farmed for food, and wove flax into linen for cash. One John lived on Cadwaller above Master; the other on Hancock below Master, a few blocks away. I found a death certificate for the Cadwaller John's wife, Rosanna, which gave her street address; and a marriage record for their son James, in a Presbyterian church. This confirmed what I already believed; Sampson's son John lived on Hancock. 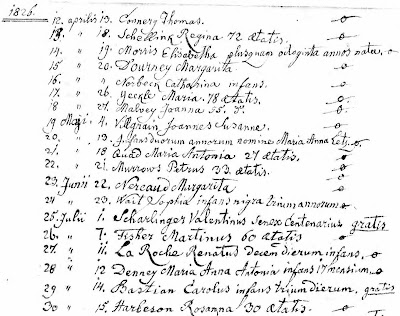 Unwilling to leave well enough alone, though, I casually looked at the other Rosannas. And there I found a Rosanna Harbeson, buried at Holy Trinity Catholic Church on July 15, 1826, aged 30. The spelling is probably insignificant; the name was always spelled Harbeson in Philadelphia before 1850. But I have no idea who this woman was, and I can find no other records of her. There are two Harbesons in the Philadelphia Street Directory for 1825, Hugh and Samuel. In fact, there were several Harbisons in Philly in the 18th century, most descended from Benjamin Harbison, b. 1725. Benjamin was undoubtedly Protestant (Methodist). I don't even know if Harbeson was a married or a maiden name. But there's a mystery here; there were Catholic Harbisons in Philly almost two decades before I suspected. Were she or her husband descended from the Ballyneill branch, or the Portmore branch? Could she have been sister or sister-in-law to William? One more point; look at the names. Early Catholic Philadelphians were mostly not Irish.
Posted by Gerard Harbison at 2:20 PM No comments:

James was christened in the parish of Ardtrea nad Desertlyn (Moneymore) on April 19, 1829. based on his later declared birthday, he was likely born April 4, to Sampson Harbison and Rose née Donnolly. Residence was indicated as 'Ballyneal'. He is likely one of the 6 male inhabitants claimed on Sampson's census return of 1831. We know nothing of his childhood; simply that he emigrated to America. The most plausible immigration record for James is on the Sir John Campbell, arrived New York July 7 1846, from Liverpool. He is listed as age 18, and a laborer. 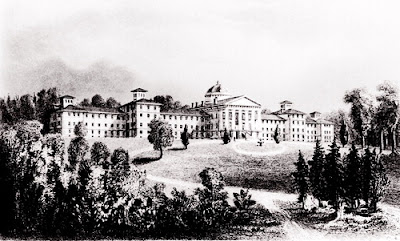 In the 1860 US census (August 28), James is listed as a laborer at the New Jersey State Lunatic Asylum (pictured above) in Ewing Township, NJ. On the return, there is also a Mary Warrington (age 27), who is designated neither an employee nor an inmate. She immigrated through New York in 1852; she was born to Thomas Warrington and Catherine Gillick in Cavan in 1833.

James' marriage to Mary Warrington on May 30, 1861 in Trenton, NJ, records his parents as Sampson and Rose Harbeson. This might be a transcription error, or a result of illiteracy. By the 1870 census (dwelling 280; Trenton 3rd ward), the couple had had five children -- Charles (age 8), Mary (age 6), Sarah J. (June 10 1865-April 15 1917), John (age 2; born February 8 1869) and Thomas (age 5 months; born January 1870). Mary and Sarah J. are recorded as Pennsylvania births, while the others are New Jersey. All five children married and had issue. James' draft registration in June 1863 is in Woodbury, PA, alongside Henry K Harbison, two years older (who was likely a brother) and on the same page as Henry Harbison's son William. So apparently James was temporarily in Blair Co. from 1863 to the end of the Civil War.

mary Warrington Harbisopn died in 1871. James married again, to Eliza Cronin (b. c 1841; Ireland) on April 11, 1875, again in Trenton, NJ, but she died a little more than a year later, likely in childbirth. James lived in Trenton, according to the city directories, until 1876. James was living with his son Thomas in Philadelphia, on 2213 Palethorp St., in 1900, according to the census, and with his widowed daughter Mary Harbison Fennen in 1910, at 2151 N 34d St., a boarding house; this census lists his year of immigration as 1846.

James died on February 12, 1912, of myocarditis. His address was given as 2110 N 2nd St, 19th ward, which was the address of his daughter Sarah J McClernan; occupation was watchman.

James was buried in New Cathedral Cemetery, Philadelphia, in the same plot as Charles Harbison, a nephew. The year of his death is misstated on both death certificate and headstone; as I've often remarked, 19th century people knew their birthday, but not always the year they were born. His father is also misstated as 'Henry'. Since James was a widower, it's possible his uncle was mistaken for his father.

Posted by Gerard Harbison at 10:06 AM No comments: