"The spawn of Scottish covenanters"

Scotland's reformation dates to 1560, when John Knox, one of Calvin's acolytes, co-wrote the Calvinist Scots Confession, and it was approved by the Scottish parliament. It was not approved by the monarchy until Mary Queen of Scots' overthrow in 1567. There followed a struggle between Presbyterians, who were against the appointment of bishops, and Episcopalians (episcopes = bishop). With the fusion of the Scottish and English monarchies, the King tried to introduce Anglican practices into the Scottish church, notably a slightly revised version of the Book of Common Prayer, which caused rioting in 1637. In 1638 the Scots drafted the National Covenant

But in special we detest and refuse the usurped authority of that Roman Antichrist upon the Scriptures of God, upon the Kirk, the civil magistrate, and consciences of men; all his tyrannous laws made upon indifferent things against our Christian liberty; his erroneous doctrine against the sufficiency of the written Word, the perfection of the law, the office of Christ and His blessed evangel; his corrupted doctrine concerning original sin, our natural inability and rebellion to God's law, our justification by faith only, our imperfect sanctification and obedience to the law, the nature, number, and use of the holy sacraments; his five bastard sacraments, with all his rites, ceremonies, and false doctrine, added to the ministration of the true sacraments, without the Word of God; his cruel judgments against infants departing without the sacrament; his absolute necessity of baptism; his blasphemous opinion of transubstantiation or real presence of Christ's body in the elements, and receiving of the same by the wicked, or bodies of men; his dispensations, with solemn oaths, perjuries, and degrees of marriage, forbidden in the Word; his cruelty against the innocent divorced; his devilish mass; his blasphemous priesthood; his profane sacrifice for the sins of the dead and the quick; his canonization of men, calling upon angels or saints departed, worshipping of imagery, relics, and crosses; dedicating of kirks, altars, days, vows to creatures; his purgatory, prayers for the dead, praying or speaking in a strange language; with his processions and blasphemous litany, and multitude of advocates or mediators; his manifold orders, auricular confession; his desperate and uncertain repentance; his general and doubtsome faith; his satisfactions of men for their sins; his justification by works, opus operatum, works of supererogation, merits, pardons, peregrinations and stations; his holy water, baptizing of bells, conjuring of spirits, crossing, saning, anointing, conjuring, hallowing of God's good creatures, with the superstitious opinion joined therewith; his worldly monarchy and wicked hierarchy; his three solemn vows, with all his shavelings of sundry sorts; his erroneous and bloody decrees made at Trent, with all the subscribers and approvers of that cruel and bloody band conjured against the Kirk of God.

Stirring stuff, no doubt. You could have pasted it seamlessly into any Ian Paisley speech of the 1960s. But, together with the Puritan agitation in England, it started a prolonged war. Copies of the Covenant were sent around the country for signing, and we know of three Herbertsons who signed it, though there were doubtless many more. Despite the fact that Cromwell probably approved of most of the Covenant, the Byzantine machinations of the war made him an enemy of the Covenanters, and this was the catalyst for the huge migration of Scottish Presbyterians to Northern Ireland, starting in 1652, and including the first Harbisons to arrive in Ireland. After the Restoration in 1660, things got still worse; the Covenanters assassinated the Primate of Scotland in 1669, and staged a series of rebellions, which the establishment met with summary executions, in a period known as the Killing Time. This, and the Scottish famine of 1690-1697, drove another wave of Presbyterians to Northern Ireland, and ultimately many of them to the United States.

Anyway, 70 years later, in the 1766 Religious Census for Tyrone, I came across this charming little snippet, which indicates that bygones had certainly not yet become bygones.

I also found in the townland of Ballymenagh, parish of Tullaniskan, two papists listed as James Horsin and Patrick Horisin. This was in a transcription of the original handwritten record, and I suspect (since neither is an Irish surname) that James may be the James Harbison (b. ~1745) of Donaghenry that Steve Harbison claims as an ancestor. But now when I'm next in Dublin I'm going to have to look at the original. Ballymenagh is just a mile from the southwest boundary of Donaghenry parish, where James's son John Harbison was born in 1772. There are also two families of papist Harts in the same parish (James's wife was Mary Hart). 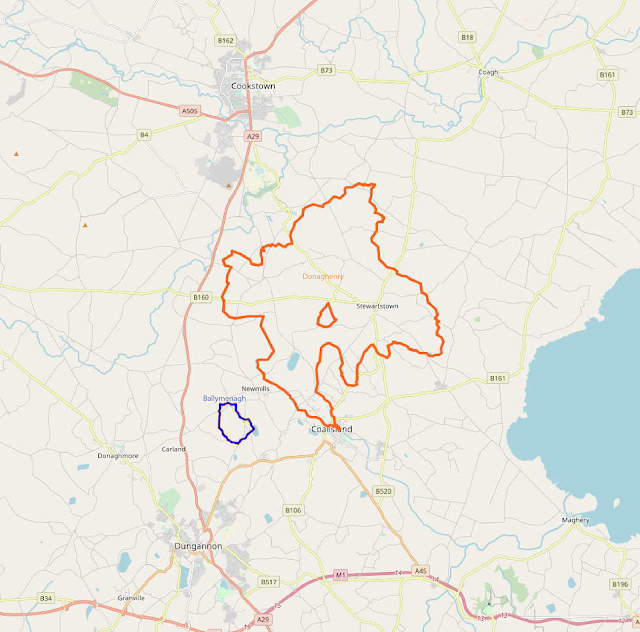 Posted by Gerard Harbison at 3:36 PM